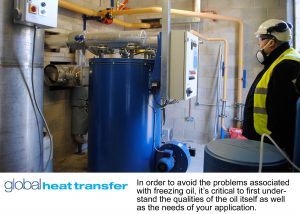 words for snow and ice; because freezing weather conditions present such a threat to the Inuit lifestyle. In fact, it’s not true – they have about the same amount of root words to mean frozen water as English speakers. However, they do have an in depth understanding of the impact of frozen weather, something which can’t always be said of users of thermal oil in processing applications. This is especially true in the UK, where we experience less extreme cold than in the rest of Europe argues Clive Jones, managing director of thermal fluid specialist Global Heat Transfer.

The consequences of an oil freezing can be both damaging and costly in any kind of process engineering application. Frozen thermal oils mean that heat can’t be brought to bear at the appropriate point in the application, resulting in downtime, lost production and potentially lost customers.

When you consider lost production time resulting from frozen oil, it’s crucial to understand its true cost. Not being able to run your production line means not only losing the potential income from the lost production, but also the trust of the customer and potential future business.

Once oil has solidified, you have to rely on ambient temperature to restore it to its former viscosity, as the application of focussed heat isn’t an appropriate way of melting the fluid, for obvious reason.

The worst thing you could do would be attempting to use a system in which the oil is already frozen. This could cause serious damage to the pump and associated peripherals such as the motor and potentially any control equipment. There have been many occasions on which I’ve been called to site by a company that believes its only problem is frozen fluid, only to find that in fact they have a substantial repair bill that will haunt them once the fluid is returned to a usable state.

In order to avoid the problems associated with freezing oil, it’s critical to first understand the qualities of the oil itself as well as the needs of your application. Many of the oils designed to operate at extremely high temperatures, of between 340°C and 400°C for instance, will freeze at 0°C or higher, some as high as 15°C. This is fine provided you have planned your application correctly in the first instance – so that the oils are never exposed to such low temperatures.

Just as certain fluids are intended to be used at ultra-high operating temperatures others as specifically for use in low temperatures. A typical low temperature fluid might be operable between -50°C and +120°C to +220°C, with an extremely versatile fluid functioning between temperatures as extreme as -90°C and +300°C.

The easiest way get the right oil for your application is to consult a specialist, who is already conversant with the temperature extremes at which each oil can operate. But failing that, most responsible providers will also offer charts that clearly delineate the extremes that their own oils can withstand, either on their web sites or on request.

The key is system and storage design and location. Evidently, one has less choice of system design, as there may well be other factors that have greater sway over the location of each point in the process and even over the design of the pipe-work. However, under normal circumstances it should be possible to choose storage locations that allow oil to be kept at a reasonable ambient temperature at all times.

There are a number of issues that can be addressed to help avoid the problems that arise as the result of freezing oil. The first, and perhaps most important with regard to oil that is currently in use, is to leave the circulation pump running when the boiler is not on. The friction and heat from the pump will keep the oil at a sufficiently high temperature to ensure it doesn’t freeze.

There are also measures that can be taken to protect stock oil that isn’t already in use in your system. The first way is to make sure that this oil; especially ‘top oil’ that might need to be called into use quickly is stored inside. Some oils can become extremely viscous in low temperatures, even if they don’t freeze.
If this is impossible, or in cases where oil is stored in an unheated building such as a shed or warehouse, purpose designed barrel warmers can be provided by your thermal oil supplier.

The most common problems we encounter associated with freezing oil are the result of winter shutdowns shutdown or periods of low production output, when ambient temperatures in the plant and storage areas are often allowed to drop.

The first precaution to take is ensuring that you heat up the system very slowly after the shutdown, just in case there is condensation in the system and the oil. The next step, if the temperature has been extremely low is to heat up the ring main first and then introduce the heat exchangers one at a time. Both of these steps will help minimise the impact on the system itself and reduce any potential damage.

You should also ensure you have sufficient supply of oil in stock as lead times for delivery may well be longer with some companies, especially in peak periods.

You should also consider the fact that, if your plant is suffering from cold weather, the roads and logistics networks are probably also suffering. As a result, delivery of oil may be affected if snow and ice causes transportation issues.

Naturally, it also makes sense to ensure that the protection on your power supply is adequate and that you have appropriate standby power measures in place to ensure continuity should there be an outage. After all, without power, we have no heat. Having said that, should there be a power outage in a process application, you may well find that frozen thermal fluids are the least of your worries!

Given the problems we’ve discussed, it would be sensible to ask whether one should turn to steam as a heat transfer method and disregard oil entirely. However, in a cold climate, steam systems are subject to freezing, burst pipes and damaged components. Furthermore, they require extensive maintenance on steam traps, valves, condensate return pumps, expansion joints and water analysis and treatment.

In contrast, thermal fluid systems require no traps, condensate return, blowdown or water additives. If the proper fluid is specified, and the measures we’ve discussed are taken, you should be able to develop a sufficiently strong understanding of the properties and care of thermal fluids to both keep your own stocks and associated equipment in good condition and obviate the need to invent an Inuit like lexicon to describe snow and ice.